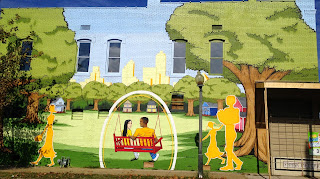 As a native Memphian, artist Charlie Forrester was more than excited to bring something “a little more unique” to the public art scene in Memphis. With the help of UrbanArt, Forrester has recently completed his mural installation at Brian’s Grocery Store, located at 533 Noth 5th Street in the Uptown Neighborhood. The self-taught artist hoped to use his background in illustration to add a “unique type of light and dynamic quality” to the mural, which spans the side wall of the grocery store. Forrester observed that there has recently been renaissance, or a “heightened awareness and a stronger desire” for public art among Memphians, and he expressed how excited he is to be a part of it, even if it is “something small”. He also noted how Memphis, a city he says is “rich in culture, expression, and diversity,” deserves artwork that “will be celebrated—it should evoke feelings of pride and ownership of the communities we are a part of.” Forrester’s hope for the mural is that it will do just this—that people will walk away from the mural instilled with a sense of community pride, appreciation for the city they live in, and for the people who make up the neighborhoods around them. The mural should ultimately instill a sense of hopefulness of things to come.

Forrester also urges viewers to pay close attention to the themes represented in the mural that provide insight into the history of the Uptown neighborhood. For example, the artist explained that the trees are a large part of the mural because they are a large part of the community: “the trees were originally planted in 1920s, which symbolize Uptown’s history of being one of the first suburbs in Memphis.” He also explained that the red swing, the featureless figures, the multicolored homes, and the city skyline speak to a larger message about the Uptown neighborhood and Memphis at large. Want to know what they are? Travel over to Brian’s Grocery to see for yourself!

This project was made possible by the Habitat for Humanity, Wells Fargo, and UrbanArt Commission. 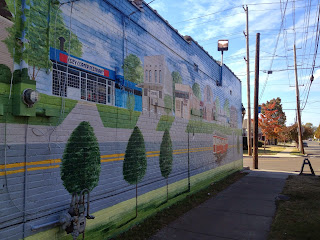 
A new addition has arrived in the Uptown neighborhood. With the help of the UrbanArt Commission, artist Carl Scott has recently completed a mural installation on the side of Roxie’s Grocery, a prominent landmark of the Uptown area located on North 3rd Street. The mural, as Scott explains, depicts the Uptown community in the springtime. According to Scott, it also represents not only Uptown, but all of Memphis. He noted how “people come from all over to see Memphis and visit Miss Roxie’s—they love the food here.” Scott also chose to feature buildings that commonly symbolize the Uptown neighborhood; a few of these places include Cozy Corner, Brian’s Grocery, and the recent Habitat for Humanity housing installations. The mural spans the side of the building, and from afar, it appears as if the mural is designed very simply. Take a few steps closer, and one will notice the incredible amount of detail on the buildings, trees, and even the streetcar in the bottom right hand corner of the wall.  When asked about the production of the mural, Scott reported that the detail is a result of the process he used to paint the buildings. He began the process by going out into the community and taking photographs of the buildings he was planning to paint. He then compiled these images into a collage type of layout in his studio. Once he had the proper arrangement, he used the photographs as guides to paint the images of the buildings onto large pieces of canvas. Scott explained that he would work between painting the buildings in his studio and painting the backdrop at Roxie’s. When the paintings of the buildings and the backdrop were complete, Scott then used an extremely strong adhesive to glue the canvas paintings to the wall, and he worked to blend them into the background. The resulting mural is an incredible depiction of the Uptown neighborhood. 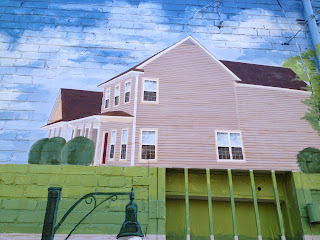 Scott also commented on how the Uptown community has greatly supported him through the process of installing the mural. He noted that people had watched him paint the mural and commented on how it “makes the whole area look better.” The mural is a valuable source of conversation—he also noted that he had witnessed people gather around the mural and discuss their favorite memories from the locations on the mural. When asked to reflect on the mural, Scott explained “when I look at it, it makes me feel good, and that's what I want people to take away from it too.” It appears as if Scott’s hopes are becoming a reality.

This project was made possible by the Habitat for Humanity, Wells Fargo, and UrbanArt Commission.
Posted by UrbanArt at 12:30 PM No comments: