REPORT FROM THE DISTRICT 7 GATEWAY SCULPTURE DEDICATION ON SEPT. 6, 2012 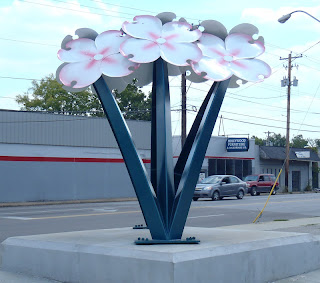 Memphis community gathered at the intersection of Chelsea and Hollywood on September 6 at a once neglected street corner to celebrate the installation of the District 7 Dogwood Gateway, a steel sculpture designed and fabricated by the Metal Museum, the only museum and work shop of this type in the U.S. The vibrantly painted sculpture signifies positive change and serves as a portal that symbolizes regeneration and resurrection for this District 7 neighborhood. The dedication brought together community members of the Midtown North Community Association and neighbors, as well as representatives of the organizations involved in realizing the Dogwood Gateway: the UrbanArt Commission and the City of Memphis, represented by District 7 Councilman Lee Harris. Rhodes College, under the leadership of Dorothy Cox, Community Liaison of the Office of External Programs, co-sponsored the event, which culminated in a performance by its jazz band, while students and volunteered to help prepare and clean up the area.

The Dogwood Gateway has a context: for each of the City’s districts, well-respected artists from the area are designing unique entry points to the neighborhoods. They are enriching Memphis with new landmarks and cultural assets that create places for people. This dedication is the first during the UrbanArt Commission’s fifteen-year-anniversary celebration, also marking the tenth anniversary of the City of Memphis Percent-for-Art Program.

Posted by UrbanArt at 8:01 AM No comments: 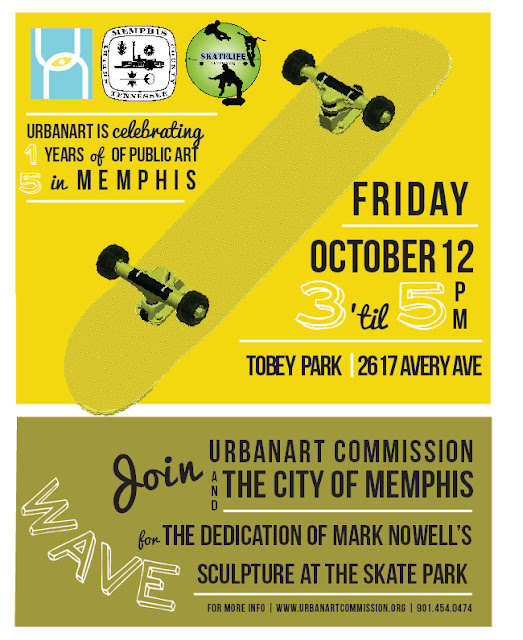 DEDICATION OF NEW WAVE SCULPTURE AT TOBEY PARK SKATE PARK ON FRIDAY, OCTOBER 12 FROM 3 TO 5 PM

Memphis artist Mark Nowell’s latest public art installation is a monumental landmark at the Tobey Park Skate Park, 1627 Avery Avenue in Memphis, that honors the culture of skateboarding in a dynamic and interactive way.  The UrbanArt Commission will host a dedication ceremony and celebration for the sculpture on Friday, October 12 from 3 to 5 PM.  The public is invited to attend and enjoy refreshments, live music, and a speaker program.

The Wave acts as a permanent landmark and monument for the Skate Park, while also acting as an integral and functional component of the skateboarding area.  Nowell describes the sculpture as “symbol of the culture and history of skateboarding.”  Previous commissions with the organization include Aspire at Brewster Elementary School and A Center in the Universe at Katie Sexton Community Center.  Throughout his career, Nowell has completed numerous commissions around the city, including Shazam, 2005, on the corner on Monroe and Madison.

The Tobey Park Skate Park, Memphis’ first public skateboarding park, was dedicated and opened to the public in November 2011.  The Skate Park was brought to Memphis largely through the efforts of Skatelife Memphis, an organization that is focused on increasing public awareness of the benefits of skateboarding related to public health and community building among youth.  Founder of Skatelife Memphis, Aaron Shaffer, wrote of the Skate Park, “Growing up as a surfer and skateboarder, I know how these activities positively impact the development of our youth.  So advocating for a public skate park meant showing our youth that Memphis values them and wants to let them know that we think they and their activities matter.”  Skatelife Memphis is a non-profit organization that seeks to promote Memphis and the health of Memphians by serving as an advocate for public skate parks.  They continue to act as advocates for skateboarding in the Memphis community and in surrounding communities.

The UrbanArt Commission, the independent non-profit organization that administers the City of Memphis Percent-for-Art Program, commissioned the project through an open competition. Celebrating 15 years of service to the community and the ten-year anniversary of the City of Memphis Percent-for-Art Program, UrbanArt’s mission is to enhance the cultural vibrancy of the community through public art.
Posted by UrbanArt at 2:32 PM No comments:

UrbanArt at PARK(ing) Day: celebrating 15 years of service to the community