Check out Nashville's first percent-for-art project, Ghost Ballet for the East Bank Machineworks by Alice Aycock.
Posted by UrbanArt at 1:48 PM No comments:

Click here to check out the map that UrbanArt put together to show you more about a few of our projects AND where they are located. We'll be adding more, so please keep checking back! 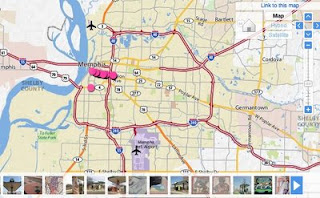 A number of people from Rugby and Frayser came out to see the Rugby Gates. Here are a few of them looking for their names stamped into bricks at the base of the 20-foot column. 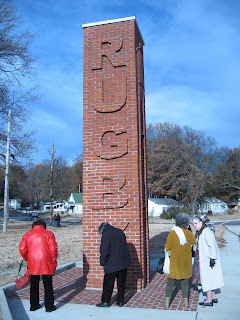 Councilwoman Barbara Swearengen Ware of District 7 came out to say a few words. 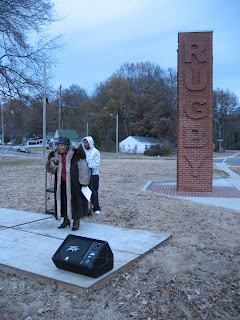 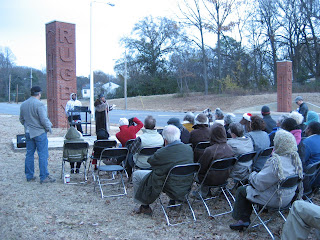 Artist Gregg Schlanger thanking all of the people who helped him with the project. 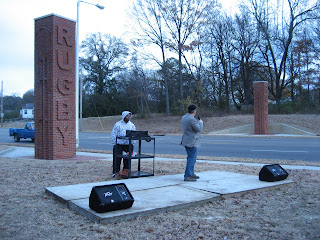 Gregg and his family. 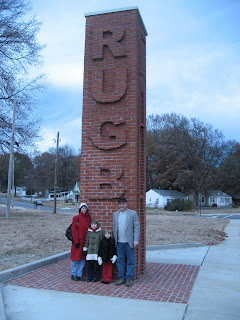 Posted by UrbanArt at 8:27 AM No comments: 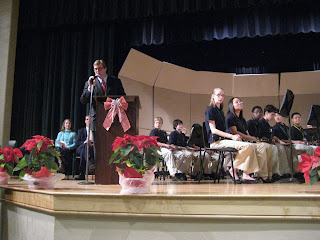 Artist Kristi Duckworth thanking everyone at the school for all of their work on the mosaic. 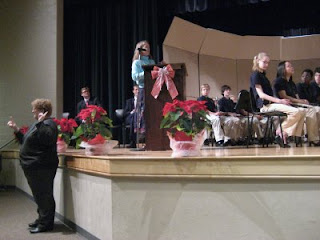 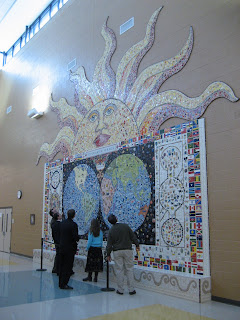 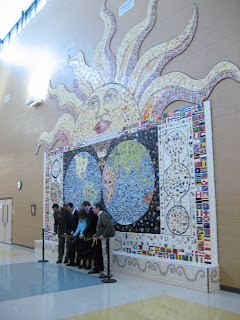 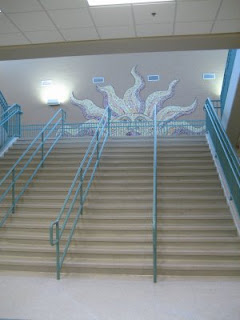 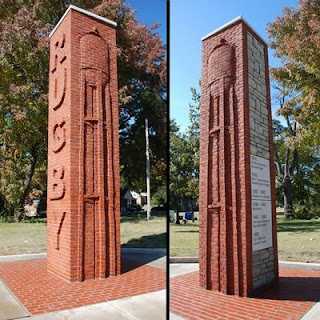 Celebrating the Completion of a Community Public Art Project

Rugby Gates is a City of Memphis Percent-for-Art project and was a part of the Overton Crossing road-widening project. Artist Gregg Schlanger of Clarksville, TN, worked closely with the community of Rugby and with the greater Frayser community to collect stories and history about the area and the people who live here.

The project consists of the two 20-foot-tall columns and ten 5-foot columns that repeat the gateway motif as one travels up Overton Crossing. Schlanger chose to make the columns out of brick due to Frayser once being the home of Memphis’s brick yards. He received 80,000 pounds of donated clay not only from Frayser, but from the original farm of Dr. John Frayser for whom the area was named.

Schlanger focused on a few community icons such as a water tower that formerly stood at the top of Overton Crossing near Vine Street, a stone gateway that was near where the large columns now stand, street cars that ran from downtown Memphis and an old train bridge over the nearby Wolf River.

The collected images were carved into the brick columns, creating relief images. In addition, he made 100 clay tiles carved with the likenesses of people from the area: people who helped with the project, historical figures and images that represent the people’s stories. There are 10 carved tiles on each small column.

Twenty-six local high school students were hired to assist in making the bricks at Arkwings, which is located around the corner from the project, and was set up as a temporary brickyard for the project. These bricks were stamped with over 400 names submitted by people who live in the neighborhood. Schlanger worked with high school students and the Frayser Community Development Corporation to hand out 2500 flyers door-to-door in the area to request names for the bricks.

The project was commissioned by the UrbanArt Commission for the City of Memphis. UrbanArt oversees the City’s Percent-for-Art program. UrbanArt’s mission is to create a dynamic, vibrant, nurturing community through art and design.

For more information contact Elizabeth Alley, Director of Public Art, or John Weeden, Executive Director, at 901. 454.0474.
Posted by UrbanArt at 12:51 PM No comments: 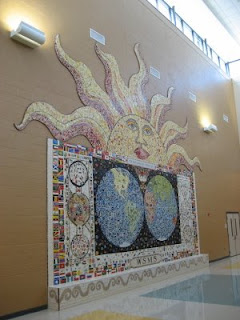 The theme “Diversity” was chosen to reflect the wide range of backgrounds and ethnicities of the students at White Station Middle School. Over a two-month period students in grades six through eight, faculty, and administrators created individual tiles reflecting the foods, culture, and landmarks of countries, creatures of the oceans, and objects in outer space. The sun rising above the earth represents harmony and hope. The artist hopes to inspire current and future students to find the world around them an interesting place, fostering tolerance and exploration. The completed mosaic contains over 250,000 tiles, and a time capsule is located inside the bench.

For additional information,
contact UrbanArt Commission 454-0474
Posted by UrbanArt at 12:47 PM No comments: